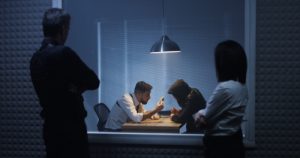 Under the Sixth Amendment of the United States Constitution and the laws of New Jersey, suspects are entitled to have an attorney present while they are held in custody for questioning.

But how explicit must your request for counsel be?

In this case, the Defendant was hired as in-home nanny and was responsible for the care of Tommy, a less than one year old child. A few months later, Tommy’s parents noticed that he would cry whenever his leg was touched. When his parents took him to the hospital, they discovered that Tommy had sustained three bone fractures. A detective from the Somerset County Prosecutor’s Office interviewed the family and then interviewed the Defendant a few days later.

Prior to questioning, the Defendant agreed to provide a statement on video after waiving her Miranda rights. Although the Defendant initially denied any responsibility for Tommy’s injuries, the detective conducting the interview told her that there were camera’s inside the house that captured her interactions with Tommy. The detective also told the Defendant that if she lied, things would get worse.

Before disclosing any incriminating information, the Defendant asked “But now what do I do about an attorney and everything?”. The detective replied “That is your decision. I can’t give you an opinion about anything”. The detective then told the Defendant that she “would have a better option by telling the truth”.

Eventually, the Defendant said that she was full of anger and she admitted to shaking, hitting, swinging, suffocating and throwing Tommy. The Defendant also made a written statement to Tommy’s family in which she described herself as a monster and expressed that she hopes “God forgives me for all that I did”.

The Defendant was charged with endangering and aggravated assault. Prior to trial, however, the Defendant moved to suppress portions of her statement and the written note to Tommy’s family because both were made after she invoked her right to counsel. The trial court denied the Defendant’s motion and the jury found the Defendant guilty of endangering the welfare of a child and simple assault.

On appeal, the Defendant alleged that her portions of her statement and the written note should have been suppressed because her question about an attorney was an effective invocation of counsel. The Appellate Division affirmed the trial court’s decision but the Supreme Court of New Jersey granted certification to determine whether or not the Defendant had sufficiently invoked her right to counsel.

On February 8, 2022 the Supreme Court of New Jersey held that the Defendant’s question regarding an attorney constituted an ambiguous, but nonetheless valid, invocation of her right to counsel. The Court came to this conclusion based on earlier precedent.

The United States Supreme Court held in Davis v. United States that a suspect’s request for counsel must be “unambiguous or unequivocal”. In other words, if a suspect made an unclear and unambiguous statement regarding an attorney, officers are not required to stop an interrogation.

However, in State v. Chew, the New Jersey Supreme Court rejected this standard and established that a suspect does not need to be articulate, clear or explicit in requesting counsel and that any indication of a desire for counsel, however ambiguous, will trigger entitlement to counsel.

Following this standard, the Court concluded that the Defendant’s question about getting an attorney constituted an invocation of her right to counsel. As such, the officers should have ceased questioning and sought clarification as to whether or not the Defendant was requesting for an attorney to be present. As a result, the Court reversed this matter and remanded to the trial court.

Police in Bergen, Hudson, Passaic, Morris, and Essex Counties regularly interrogate individuals without an attorney present.  Call our office if you or a loved on are being contacted by police to give a statement.  We will be able to assess the situation and advise you on the most pragmatic course of action.